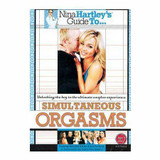 Adult Legend Nina Hartley, producer of countless guides to better sex and host of Adam & Eve’s best-selling Guides to Better Sex, brings you the very first step-by-step tutorial for achieving simultaneous orgasm. Her insightful observations and thoughtful commentaries at once relax and inform, while real-life couples enthusiastically perform each lesson with clarity and eroticism.

Lesson 1 – The Goal of Simultaneous Orgasms

Nina, with the help of Devon and Kayden, discuss the pursuit of the elusive simultaneous orgasm by both committed couples, and individuals with multiple partners. Myths and social pressures are explored, and practical techniques for achieving it are explained.

Lesson 3 – Being in the Right State

In clearly narrated demonstration scenes, Devon and Marcus, assisted by Nina, describe the process that gets them to the right state, with their experience as real-life couple emphasized. The same process applies to threesomes who want to climax simultaneously.

In a fantasy scene finale, Kayden and Erik Everhard deliver an athletic performance drawing on their tremendous chemistry to produce a series of climaxes for Kayden in different positions, leading up to a crescendo in which both climax simultaneously.

Orgasms for Two: The Joy of Partner Sex

MSRP:
$19.95
$10.00
A down-to-earth guide to becoming happier and healthier through the benefits of mutually satisfying pleasure—from a renowned sex educator featured on Netflix’s the goop lab with Gwyneth Paltrow. In...
Add to Cart Quick view
Sale

Orgasm in 5 Minutes: 1001 Roads to Happiness

MSRP:
$14.95
$8.00
What exactly does the feminine orgasm consist of? Can all women have them? What techniques and postures are the most appropriate to attain one? Are all women multiorgasmic? Although the...
Add to Cart Quick view

MSRP:
$17.00
Orgasmix is an orgasm enhancing gel for women. Most of the ingredients are typically present in water-based lubricants while a few others are usually seen in dietary supplements to increase sex drive...
Add to Cart Quick view

MSRP:
$15.99
Adjustable tweezer-style nipple clamps with tiny bells. The small silver bells ring when they move. Soft rubber tips. Adjust the clamps by sliding the metal rings up the tweezers _ from...
Add to Cart Quick view

MSRP:
$12.95
Perfect for anyone looking to achieve the naughty-but-nice innocent look. Non-piercing, non-tarnishing and nickel-free. Delicate and feminine.
Add to Cart Quick view

MSRP:
$10.95
Get ride of the ice cubes, they don't last long. Keep the cool sizzling for hours with Nip Zip. Nipz Zip is the most exciting thing to happen to nipples since the invention of ice cubes. This...
Add to Cart Quick view

MSRP:
$19.95
Learn how to reach the ultimate climax! The most important element of any fulfilling sexual relationship is good communication. Learning how to listen to your partner is the foundation of real...
Add to Cart Quick view

MSRP:
$28.00
Nipplettes are fully adjustable for a comfortable and fit. Simple push button activation sends vibrations throughout the nipple and areola. With the nipples fully stimulated, your hands are...
Add to Cart Quick view